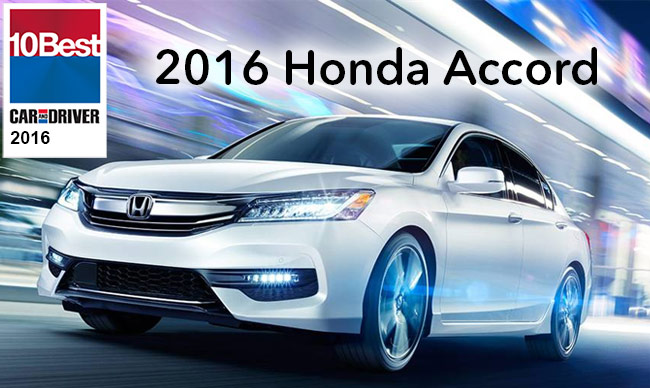 The Record Breaking Honda Accord

The Accord has proven itself to be a standard of excellence. For the 30th time in 32 years, the vehicle has won the prestigious Car & Driver 10Best award. At dealerships such as Barbour Hendrick Honda in Greenville, NC, potential buyers can be absolutely sure that the cars they are looking at go above and beyond the typical vehicle on the market.

What Makes the Accord Exceptional

Car & Driver has recognized the Honda Accord more time than any other make or model in its history. The judges take plenty into consideration when choosing the winners. They judge based on performance of intended functions (Was it designed to be fast? Family oriented?), engaging features and appearances, and the best bang for your buck. Only cars that are affordable are given serious condsideration, because this award is intended to inform the general population of the best car they can feasibly buy.

New Features of the Honda Accord

The Barbour Hendrick Honda dealership in Greenville is only one of many nationwide locations to find the Accord. The 2016 Accord comes with a host of new features and design upgrades that built upon the 2013 model. It is a sportier frame, with new colors and interior options. The Accord includes safety options, Apple CarPlay, LED lighting, rain sensors, and cameras on the front and back of the car.

Continued Success of the Accord

Out of all the cars on the market, the Accord is noted as the only one to consistently be awarded the 10Best recognition year after year. The Accord was first produced in 1976, and has expanded from its production in Ohio to locations through the country, such as the Barbour Hendrick Honda in Greenville. Sales have topped 12.5 million units in subsequent years, and for the past three years (2013-2015) it has also been recognized as the most popular car in America.

The Honda Accord: Making History

With this historic streak as the 30 time winner of Car & Driver’s 10Best award, the Accord has proven itself to be head and shoulders above the competition.