The 2016 Honda Civic was just announced as the 2016 North American Car of the Year. This is the second time that the Honda Civic has taken home this award, driving off with it a decade ago in 2006. These two wins are added to the eleven Honda Civics that have been finalist for this award since 1994.

“The all-new Civic was developed and is built in North America, making this North American Car of the Year win even sweeter,” said Jeff Conrad, Honda Division senior vice president and general manager.

Updates to the 2016 Honda Civic

The 2016 Honda Civic was redesigned inside and out. The new Honda Civic has a much more spacious cabin and many other upgrades including updated safety features, improved engine choices, and the latest technology features. 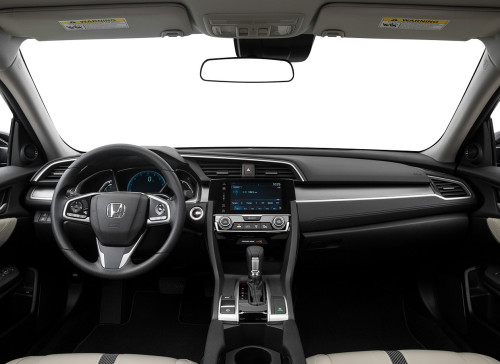 The Civic is built with an Advanced Compatibility Engineering (ACE) body structure, which gives passengers extra protection in the event of a collision. While most of the safety features come standard in all 2016 Civics, there are also optional safety features such as Forward Collision Warning, Lane Departure Warning, Collision Mitigation Braking system, and the Road Departure Mitigation System.

For the first time in US history, the Honda Civic can be purchased with Honda turbo engine technology. The 2016 Civic comes with improved fuel efficiency regardless of which engine or Trim you go with, but there are a few differences to keep in mind to help you make your decision.

The Sedan LX and EX Trims both run on a 2-liter 4-cylinder i-VTEC engine. When you compare this to base model engines offered for the Civic in the past, you will see that this is a much more powerful engine. Both Trims have the Continuously Variable Transmission (CTV) engine, but the LX Sedan is also available in a 6-speed manual transmission.

If you make the decision to go with the EX-T, EX-L, or Touring sedan you will enjoy the power of a 1.5-liter turbocharged 4-cylinder with direct-injection and a CVT. All of these engine choices give you impeccable fuel efficiency and performance with EPA estimated rating of over 40 mpg* on the highway.

The 2016 Honda Civic is packed with new premium technology features to keep you both safe and happy driving around town. All of the 2016 Civic Trims come with BlueTooth HandsFreeLink, BlueTooth Streaming Audio, and a USB audio interface as standard features. Other Trims selections include options such as, Pandora Compatibility, HondaLink, and Apple CarPlay. The tech features in the 2016 Honda Civic aren’t just convenient, they also keep you safe by allowing you to keep your eyes on the road!

Find out more information on the 2016 Honda Civic at Barbour Hendrick Honda in Greenville, NC. Visit us today and be one of the first in the area to drive the 2016 North American Car of the Year!

*Based on EPA mileage ratings. Use for comparison purposes only. Your mileage will vary depending on how you drive and maintain your vehicle, driving conditions and other factors.